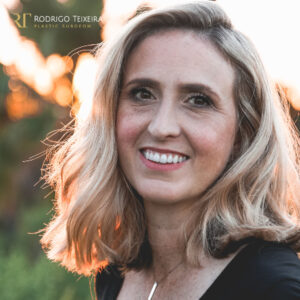 Droopy or Hooded eyelids, what is the difference?

Droopy eyelids, also known as eyelid ptosis, is the condition where the upper eyelid does not completely open and sits on a lower position, covering a larger portion of the eye. Normally, there is confusion with hooded eyelids, or dermatochalasis, when excess skin sagging in the upper lid causes visual obstruction. Both eyelid ptosis and dermatochalasis can affect vision and they can also appear together.

The symptoms of ptosis manifest in the drop of one or both upper eyelids which can obstruct vision in some cases. For most people the drop is imperceptible. Other symptoms could be very watery or dry eyes, and you could appear tired. In some cases where the eyelids sit very low, the person may have to tilt their heads back to see, even during normal conversations.

Eyelid hooding can also lead to similar symptoms, but more commonly patients will complain about their aged and tired appearance or have some degree of visual obstruction, especially on the upper-lateral area of the field of vision.

Ageing
Through the ageing process, the levator muscle starts to weaken and stretch which leads to dropping. The skin could also start to sag down over the eyes and cause hooding.

Eye Injury
Injury to the levator muscle due to accidents that damage the eye area. Although it may seem unlikely, even simple movements such as wearing lenses over a period of time could lead to dropping.

Eye Surgery
Sometimes after a surgical process such as cataract, glaucoma, or laser surgery. It is postulated that the eyelid could stretch during the surgical process, however, this will rectify itself over time.

Born with droopy eyelids
The cause of droopy eyelids can also be traced back to birth when the muscle that holds up the eye doesn’t develop in the right manner. This condition could cause a syndrome known as lazy eye as the child grows up.

Stroke
During a stroke, the blood supply to the brain is interrupted which could lead to the dropping in one side of the body and the face. 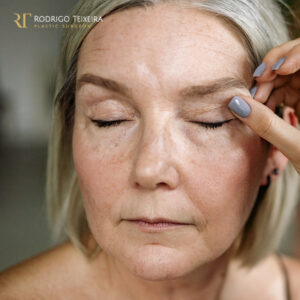 If you feel that your eyelids have too much skin excess that causes vision problems, you need to see a specialist surgeon and have a visual field test. If the test shows a visual field defect, in other words, the sagging skin flap is getting in the way of your vision you are eligible for surgery. However, surgery may also be an option if you do not like the way that your eyelids appear aesthetically, the surgeon will conduct a physical exam and then ask you about your medical history. There will be a number of tests that are run to check the extent of treatment required.

What are the treatments?

There are non-surgical options for excess and sagging skin on the upper eyelids such as wearing eyelid tape or skin tightening procedures. The tape is only useful in mild cases and does not address the issue causing the problem. Skin tightening is also better indicated for very mild laxity or for touch-ups after surgery.

The best way to treat the sagging skin folds is surgery. Blepharoplasty will not only remove the skin excess but also correct fat bags that may be present. If there is simultaneous ptosis, the treatment can be combined. Please note that dropped eyebrows can also lead to skin excess and sagging in the upper eyelids and may require treatment.

Similarly, the most effective treatment for ptosis is surgery. The levator muscle will be tightened and lifted up to the required position. There are certain risks associated with surgery and there are non-surgical treatments available, you should discuss them with a specialist surgeon experienced in ptosis.

Patient safety and satisfaction is taken very seriously by me and my team. We are committed to offering you excellent care throughout your treatment journey and helping you achieve the results you aim for. I hope that this blog has been useful and has given you more information about the factors associated with eyelid surgery. Have more questions? Don’t hesitate to reach out to me, and book an appointment.